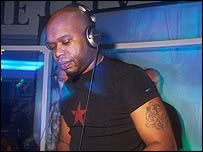 I know word has spread fast on this one, but for those of you who’ve not heard yet, Jungle / Drum & Bass legend (and BBC host / Prototype records owner-founder) Grooverider was sentenced to a four-year prison term yesterday in the United Arab Emirates. Apparently he had a gig in Dubai, and he got caught bringing a spliff through airport security (he also had some porno DVDs with him, which are illegal in Dubai as wellâ€”this aspect of the story has gone curiously underreported). Despite being a fancy international tourist hot-spot, Dubai’s got a super-strict fundamentalist Islam-inspired penal code, and Mr. Rider ended up getting a 4 year sentence for 2.16g of weed. YIKES! He’s still got 2 weeks to appeal, but it’s looking unlikely that he’ll be spared. Consider the following examples of UAE legal proceedings:

Another British tourist (this one a Rastafarian) was arrested in Dubai this year after police used some crazy sci-fi super-sensitive screening device and found 0.003g of marijuana in the tread of his shoe. According to the BBC, 0.003g is “an amount that is invisible to the naked eye and weighs less than a grain of sugar.”

Yet another traveling Brit brought MELATONIN (you know, the completely legal, over-the-counter sleep aidâ€”which is ALSO legal in Dubai) with him through the airport: he was detained while his bags were tested for drugs, and forced to sign a confession statement in Arabic without a translator.

Perhaps worst of all: some poor schmuck from Switzerland was traveling to UAE from London’s Heathrow airport, and while at Heathrow he ate some sort of poppy-seed coated bread roll. Police in Dubai found THREE POPPY SEEDS on his clothing, and he is now serving a four year sentence for OPIATE SMUGGLING.

Finally there’s Canadian citizen Bert Tatham, a UN anti-narcotics adviser to Afghanistan, who brought two poppy seeds back home with him as a symbol of his achievements limiting the opium trade. These two poppies were found by customs during his layover in Dubai, and he ended up with a four year sentence. He ended up getting a pardon, but only after some serious leveraging from UN, the Canadian embassy, and Afghanistan (as well as a large-scale letter-writing campaign). The fact that this is what it takes to get somebody pardoned for such trivial charges makes me pretty pessimistic about Grooverider’s hopes of getting out early.

View all posts by admin →

13 thoughts on “Grooverider Goes to Jail!”

New Yorker, You Disappoint Me.

Club DJs Under Investigation for Piracy

Poll: Wot U Call It?